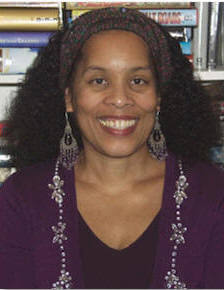 "Andrea Hairston is a novelist, essayist, playwright, and the Artistic Director of Chrysalis Theatre. Her plays have been produced at Yale Rep, Rites and Reason, the Kennedy Center, StageWest, and on Public Radio and Television. She has translated plays by Michael Ende and Kaca Celan from German to English. Ms. Hairston has received many playwriting and directing awards, including a National Endowment for the Arts Grant to Playwrights, a Rockefeller/NEA Grant for New Works, an NEA grant to work as dramaturge/director with playwright Pearl Cleage, a Ford Foundation Grant to collaborate with Senegalese Master Drummer Massamba Diop, and a Shubert Fellowship for Playwriting. Since 1997, her plays produced by Chrysalis Theatre, Soul Repairs, Lonely Stardust, Hummingbird Flying Backward, and Dispatches have been science fiction plays. Archangels of Funk, a sci-fi theatre jam, garnered her a Massachusetts Cultural Council Fellowship for 2003.