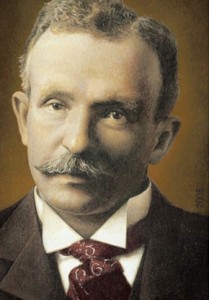 "Chesnutt was born on June 20, 1858, to Andrew Jackson Chesnutt and Ann Maria Sampson in Cleveland, Ohio. Both his parents, who were free Blacks from Fayetteville, North Carolina, had moved to Cleveland in 1856 to pursue the greater opportunities for Blacks in the northern states. When the Civil War ended in 1865, the family returned to Fayetteville where Chesnutt spent his remainder of his youth. Both of his parents were of mixed ancestry, and his paternal grandfather is known to have been a white farmer. Chesnutt’s skin tone was light enough that he could have passed as a white man, and this miscegenation later came to influence his writings."

He was known for his books of short stories published in 1899 The Conjure Woman and The Wife of Youth. Both collections addressed themes of slavery with wit and accessibility. He wrote a biography on Frederick Douglass, the novel The House Behind the Cedars (1900), and The Marrow of Tradition published in 1901, which was said to be his most ambitious novel. - BlackHistoryNow.com