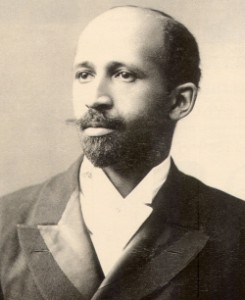 "William Edward Burghardt DuBois (b. 1868 - d. 1963) was a preeminent analyst of the roots of racism and the subordination of African Americans. He combined scholarship with activism in a tireless search for ways to improve the lives of all Blacks, everywhere.

DuBois was born in 1868 in Great Barrington, Massachusetts. While slavery had only recently been abolished, the town had a long-standing free black population, and a benign atmosphere. In high school he became the local correspondent for a New York newspaper, and excelled in his studies. His hopes of attending Harvard University were frustrated by a lack of means, and so DuBois accepted a scholarship from Fisk College in Nashville, Tennessee."

DuBois is perhaps best known for his book, The Souls of Black Folk, published in 1903, in which he critiqued Booker T. Washington's philosophy of only basic economic achievement as a goal for all Blacks. - BlackHistoryNow.com