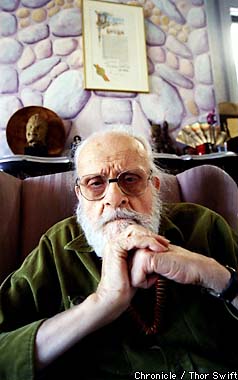 Henry “Harry” Hay Jr. helped found the American homosexual rights movement in the 1950’s and fought   steadily for his vision of the unique role of homosexuals could play in society.  Born in England in 1912, Hay moved to Los Angeles with his family in 1919.  In the late 1940’s he helped found an organization that later became the Mattachine Society.  By the late 1960’s, Hay had rejoined other homophiles to establish the North American Conference of Homophile Organizations, worked in the American Indian Movement, and helped launch the Los Angeles Gay Liberation Front. Hay rejected the idea that homosexuals should assimilate into society—instead he thought they should change it so that gays were accepted as full individuals. He was active throughout his life in working for gay rights and died in 2002.