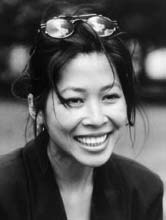 Loung Ung is a survivor of the killing fields of Cambodia, one of the bloodiest episodes of the twentieth century and has devoted herself to justice and reconciliation in her homeland. The World Economic Forum selected Loung as one of the “100 Global Leaders of Tomorrow.” Her best-selling memoir, First They Killed My Father: a daughter of Cambodia Remembers, (HarperCollins 2000) was the recipient of the 2001 Asian/Pacific American Librarians’ Association award for “Excellence in Adult Non-Fiction Literature”. Since 1998, Loung has worked as an advocate to end violence against women in Maine and as spokesperson for the Campaign for a Landmine-Free from 1997-2002.