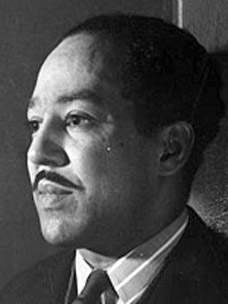 Langston Hughes, one of the primary spokesmen for and contributor to the Harlem Renaissance, was born in Joplin, Missouri. His early years were full of struggle and travel. He taught English for a while in Mexico, spent a year at Columbia University, served as a seaman on freighters to Europe and Africa, and worked in Paris as a cook and waiter. Hughes was given a scholarship that enabled him to attend college at Lincoln University in Pennsylvania, where he graduated in 1929.

His first book of poems, The Weary Blues (1926) appeared at the height of the Harlem Renaissance. Its rejection of traditional European poetic forms for the inflections of jazz, blues, and dialect represented an attempt to fashion a model of African American poetry based on the everyday hopes, fears, and dreams of black Americans. In his poetry, Hughes insisted on realistic images of the African American experience, with all its positive and negative characteristics. 'What is poetry?' he has asked. 'It is the human soul entire, squeezed like a lemon or a lime, drop by drop, into atomic words.'

Other collections of Hughes' poems include Fine Clothes to the Jew (Knopf, 1927), Dear Lovely Death(Troutbeck Press, 1931), Shakespeare in Harlem (Knopf, 1942), and The Collected Poems of Langston Hughes (Knopf, 1994). An anthology of his work, The Langston Hughes Reader, was published in 1968 by Braziller. Hughes was also a fiction writer, and published two novels, Not Without Laughter (Knopf, 1930) and Tambourines to Glory (John Day, 1958), as well as plays and several volumes of stories, including The Ways of White Folks (Knopf, 1934). His various awards include a Guggenheim Fellowship (1935), a Rosenwald Fellowship (1940), and an American Academy of Arts and Letters grant (1947).