This page is an archived collection description from 2004.

While the content remains useful, the descriptions may not reflect recent scholarship. Please contact Special Collections lib-spec@uiowa.edu with any questions. 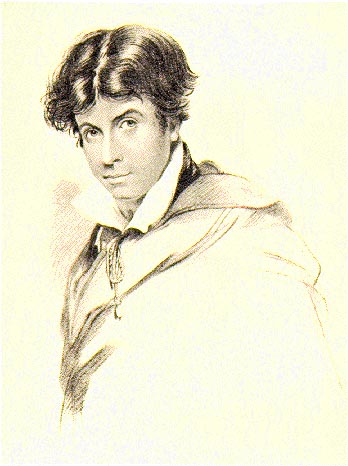 Leigh Hunt, engraved by H. Meyer from a drawing by J. Hayter 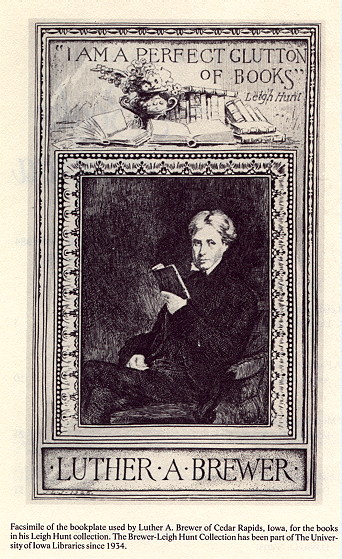 Who Was Luther Brewer?

The Brewer-Leigh Hunt Collection at Iowa

The University of Iowa Libraries possesses the most complete Leigh Hunt collection in the world.  The core of the collection was originally assembled by Luther Brewer, an Iowa native who owned and operated The Torch Press in Cedar Rapids, Iowa.  Brewer began collecting Hunt’s work in 1920 and continued to supplement his collection for the remaining thirteen years of his life.  In an article about the collection, Frank Hanlin, then head of collections at The University of Iowa Libraries, notes that Brewer was lucky to have had little competition for Hunt materials:

It was fortunate, too, that at this time Mr. Brewer had few if any competitors, as his means were modest and he could scarcely have afforded to buy books or manuscripts by such writers as Byron, Shelley, Keats, Lamb, or any of the other literary giants of the time. But in Leigh Hunt he had one who knew them all–and intimately.

The University of Iowa Libraries purchased the collection from the Brewer estate in 1934 for $20,000. It has since been enhanced whenever means and opportunity have allowed. The collection is nearly complete in first and subsequent editions of Hunt’s work, including Hunt’s periodicals and other journalistic contributions.  Original Hunt manuscripts number over 100, and more than 75 titles owned by Hunt, most with marginalia in his hand, are featured in the collection.  Additionally, Brewer collected critical works pertaining to Hunt and his circle, as well as some original manuscripts and works by Hunt’s literary friends. Hanlin observes:

Thus a copy of the very rare first edition of Shelley’s Cenci, dedicated to Leigh Hunt, is present, with a letter from Shelley to the Olliers laid in. Mr. Brewer obtained Dickens’ Bleak House in the original parts and in other early editions because of Dickens’ alleged caricature of Leigh Hunt in the character of Skimpole. And in addition there are in the collection six autograph letters from Charles Dickens to Leigh Hunt and two from Dickens to Thornton Hunt bearing upon the unfortunate incident which Mr. Brewer made the subject of his 1930 Christmas book, Leigh Hunt and Charles Dickens: the Skimpole Caricature.

As mentioned, Hunt was an active correspondent, and wrote thousands of letters over his long lifetime. The Brewer-Hunt collection now has nearly 1600 autograph letters related to Hunt, including the recent addition of 70 letters that once comprised the Payson G. Gates collection.  These letters span Hunt’s entire lifetime: from the age of five to shortly after his death in 1859.  Correspondents represented in the collection at Iowa include Ainsworth, the Brownings, the Carlyles, the Cowden Clarkes, Cruikshank, Dickens, Forster, Godwin, Hallam, Haydon, Hogg, Horne, Lamb, Landor, James Russell Lowell, Macaulay, Vincent Novello, the Olliers, William Rossetti, Mary Shelley, Swinburne, and Thackeray, amongst others.

While several collections of Hunt letters have been published over the years, there has never been a complete edition of Hunt’s letters.  Thus, some of these letters have never been published, and most have only been published in part, given that the two main collections of Hunt letters, published by Thornton Hunt and Luther Brewer, often silently deleted significant portions.  Eleanor M. Gates’ recent work, Leigh Hunt: A Life in Letters (1998), reprints only some of the letters in the Brewer-Leigh Hunt Collection.

The Brewer-Leigh Hunt Collection is a comprehensive gathering of books and manuscripts by and about English writer James Henry Leigh Hunt (1784-1859). The collection is nearly complete in first and subsequent editions of books by Hunt. There are also presentation copies, association copies, periodicals edited by Hunt, as well as his contributions to journals, the published writing his friends, and other volumes, plus manuscripts and letters by, or associated with, Hunt. The core of the collection was purchased from the estate of Luther A. Brewer (1853-1933), a Cedar Rapids publisher (The Torch Press), in 1934, and since that time resources have been added as they have become available.  In recent years this has been made possible by a generous bequest from Desmond and Mary Bruce Leight-Hunt.

More information on the Brewer-Hunt collection, including manuscripts, ephemera, books, and related articles, can be found in the Guide to the Brewer-Leigh Hunt Collections tab.

Who Was Leigh Hunt

Leigh Hunt (1784-1859), Romantic writer, editor, critic and contemporary of Byron, Shelley, and Keats, may be best remembered for being sentenced to prison for two years on charges of libel against the Prince Regent (1813-1815). He was also one of the most outspoken and effective journalists in the age of the French Revolution, and an innovative poet whose Story of Rimini(1816) is one of the great Romantic narrative poems.

Hunt’s first book of poetry, Juvenilia (1801), put him firmly on the literary scene at 17, and went to four editions in as many years.  Through his lifetime, Hunt published more than 50 volumes of prose, poetry, and drama, as well as a huge number of influential reviews, articles, and miscellaneous essays.  He initiated independent and honest theatrical reviews in The News (1805) and The Statesman (1806), two newspapers published by his brother John Hunt, followed by a widely-read weekly newspaper, The Examiner (1808 onwards), with Leigh serving as the vocal editor clearly expressing his opinion on political subjects.

The Examiner frequently triggered confrontation with government officials, and the brothers were brought to trial several times. Acting in their own defense, they were repeatedly acquitted before libel charges pressed by the Prince Regent earned them each a two-year prison sentence and a heavy fine.  Hunt continued to edit The Examiner from prison, where he was eventually allowed to bring his family to stay with him. He was accommodated in a disused prison infirmary, redecorated and wallpapered in a fanciful manner. Here Hunt entertained some of the most famous literary figures of the time including Lord Byron and Maria Edgeworth.

Hunt’s editorial role in The Examiner involved his significant discoveries of new literary talents.  He influenced and reviewed John Keats and was the first to publish his poetry.    He was an intimate friend of both Percy and Mary Shelley, and staunchly defended the poet’s genius.  Hunt joined the Shelleys and Byron in Italy in July of 1822 to begin a new journal, The Liberal.  However, Shelley’s tragic death a few weeks later cut short that endeavor and only four quarterly issues were published. After three years living in Tuscany, Hunt returned to London, continuing to publish and edit various journals, often indebted to his kind friends to keep his large family afloat. He outlived many of his contemporaries and bridged the gap between the Romantic poets and Victorian authors, and the eras of the French Revolution and nineteenth-century imperial Britain.

Leigh Hunt was at the center of the literary and publishing world during the Romantic and Victorian early 19th century: he was the fundamental piece of the literary network in London.  His extensive correspondence reflects his intimate knowledge of literary, artistic, political and religious spheres in these key periods of British cultural history.   Hunt eagerly penned thousands of letters, many of which survive.  His correspondents include Percy and Mary Shelley, Lord Byron, the Carlyles, the Cowden-Clarkes, Charles Lamb, John Keats, Charles Dickens, the Brownings, Alexander Ireland, John Forster, Thackeray, and Wordsworth –  to name but a few.  In letters to his wife and his sister-in-law, Hunt frankly describes his encounters with these prominent figures and provides new and revealing glimpses of their personalities and endeavors.