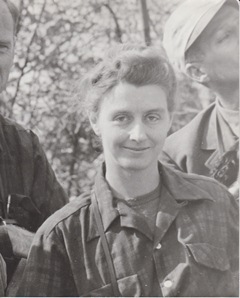 Shirley Briggs' first job was teaching art at the North Dakota Agricultural College in Fargo from 1941-1943. When most of her students were drafted during World War II, she left for Baltimore, Maryland, to begin a careeras a professional illustrator with the Glenn Martin Aircraft Corporation. From 1943 to 1945 she drew pictures of airplanes so that, as she put it, "the mechanics would know where to grease a B-26." In the fall of 1945 she went to work in Washington, D.C. as an Information Specialist/Illustrator at the U.S. Fish and Wildlife Service, Department of the Interior. It was during her two years there that she met Rachel Carson and the two discovered a shared interest in birding. In 1947, when a returning soldier claimed her job, Briggs was transferred to the U.S. Bureau of Reclamation as Chief of the Graphic section. Over the next seven years there she created charts for hearings, museum exhibits, and publications. In 1954 she painted backgrounds for exhibits such as "The Pronghorn Antelope" and "The Carolina Parakeet" at the Smithsonian Institution's Museum of Natural History. From 1956-1957 she produced dioramas for the U.S. National Park Service, mainly for the Jamestown Museum.

Shirley Briggs had joined the Audubon Naturalist Society in 1946 and helped its new president Irston Barnes invigorate the organization by volunteering to work with the education and publications departments. In 1948 she became editor of the Society's bimonthly "Wood Thrush," soon to be renamed the "Atlantic Naturalist" (at her suggestion). Over the next twenty-one years, she published contributions from some of the country's leading nature writers, naturalists, and conservationists, including Rachel Carson, Stewart Udall, Howard Zahniser, William O. Douglas, Chandler Robbins, Roger Tory Peterson, Louis Halle, Charlton Ogborn, and Irston Barnes. Briggs received the Paul Bartsch Award from the Audubon Society in 1972.

Shirley Briggs was a founding member and executive director (from 1970 to 1992) of the Rachel Carson Council, an organization established in 1965 as a pesticide research information clearinghouse for both scientists and lay people. Shirley Briggs was the author of "Basic Guide to Pesticides," published in 1992, for which she received the Robert Vanden Bosch Award from the University of California. Beginning in the 1960s, she taught courses on "Conservation Philosophy in the US" and "Politics of Conservation" for the Audubon Naturalist Society in collaboration with the U.S. Department of Agriculture Graduate School, Field Studies curriculum. Shirley Briggs died in Bethesda, Maryland, on November 11, 2004.

Shirley Briggs' parents John and Nellie Briggs were graduates of Morningside College in Sioux City. Her father John Ely Briggs earned a PhD from the State University of Iowa in 1914 and taught in the University's Political Science Department until his death in 1952. He edited the "Palimpsest," a publication of the State Historical Society of Iowa, from 1922 to 1945, wrote many articles on the history and political life of Iowa, and was an inveterate amateur photographer. John Ely Briggs served as the model for Parson Weems in Grant Wood's 1939 painting "Parson Weems' Fable."